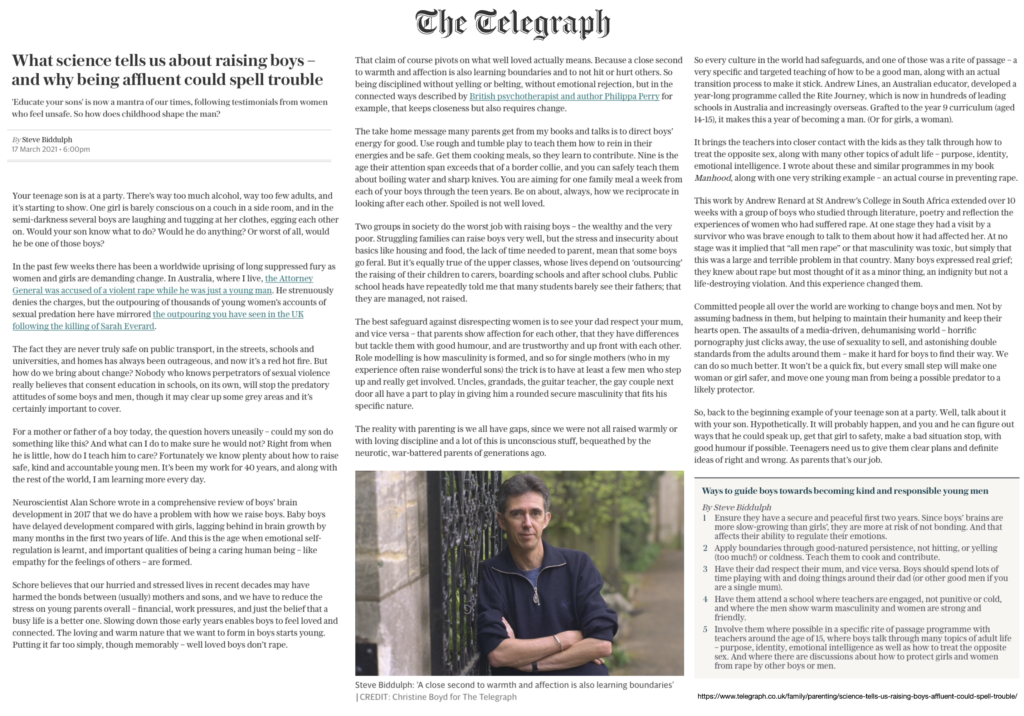 Your teenage son is at a party. There’s way too much alcohol, way too few adults, and it’s starting to show. One girl is barely conscious on a couch in a side room, and in the semi-darkness several boys are laughing and tugging at her clothes, egging each other on. Would your son know what to do? Would he do anything? Or worst of all, would he be one of those boys?

In the past few weeks there has been a worldwide uprising of long suppressed fury as women and girls are demanding change. In Australia, where I live, the Attorney General was accused of a violent rape while he was just a young man. He strenuously denies the charges, but the outpouring of thousands of young women’s accounts of sexual predation here have mirrored the outpouring you have seen in the UK following the killing of Sarah Everard.

The fact they are never truly safe on public transport, in the streets, schools and universities, and homes has always been outrageous, and now it’s a red hot fire. But how do we bring about change? Nobody who knows perpetrators of sexual violence really believes that consent education in schools, on its own, will stop the predatory attitudes of some boys and men, though it may clear up some grey areas and it’s certainly important to cover.

For a mother or father of a boy today, the question hovers uneasily – could my son do something like this? And what can I do to make sure he would not? Right from when he is little, how do I teach him to care? Fortunately we know plenty about how to raise safe, kind and accountable young men. It’s been my work for 40 years, and along with the rest of the world, I am learning more every day.

Neuroscientist Alan Schore wrote in a comprehensive review of boys’ brain development in 2017 that we do have a problem with how we raise boys. Baby boys have delayed development compared with girls, lagging behind in brain growth by many months in the first two years of life. And this is the age when emotional self-regulation is learnt, and important qualities of being a caring human being – like empathy for the feelings of others – are formed.

Schore believes that our hurried and stressed lives in recent decades may have harmed the bonds between (usually) mothers and sons, and we have to reduce the stress on young parents overall – financial, work pressures, and just the belief that a busy life is a better one. Slowing down those early years enables boys to feel loved and connected. The loving and warm nature that we want to form in boys starts young. Putting it far too simply, though memorably – well loved boys don’t rape.

That claim of course pivots on what well loved actually means. Because a close second to warmth and affection is also learning boundaries and to not hit or hurt others. So being disciplined without yelling or belting, without emotional rejection, but in the connected ways described by British psychotherapist and author Philippa Perry for example, that keeps closeness but also requires change.

The take home message many parents get from my books and talks is to direct boys’ energy for good. Use rough and tumble play to teach them how to rein in their energies and be safe. Get them cooking meals, so they learn to contribute. Nine is the age their attention span exceeds that of a border collie, and you can safely teach them about boiling water and sharp knives. You are aiming for one family meal a week from each of your boys through the teen years. Be on about, always, how we reciprocate in looking after each other. Spoiled is not well loved.

Two groups in society do the worst job with raising boys – the wealthy and the very poor. Struggling families can raise boys very well, but the stress and insecurity about basics like housing and food, the lack of time needed to parent, mean that some boys go feral. But it’s equally true of the upper classes, whose lives depend on ‘outsourcing’ the raising of their children to carers, boarding schools and after school clubs. Public school heads have repeatedly told me that many students barely see their fathers; that they are managed, not raised.

The best safeguard against disrespecting women is to see your dad respect your mum, and vice versa – that parents show affection for each other, that they have differences but tackle them with good humour, and are trustworthy and up front with each other. Role modelling is how masculinity is formed, and so for single mothers (who in my experience often raise wonderful sons) the trick is to have at least a few men who step up and really get involved. Uncles, grandads, the guitar teacher, the gay couple next door all have a part to play in giving him a rounded secure masculinity that fits his specific nature.

The reality with parenting is we all have gaps, since we were not all raised warmly or with loving discipline and a lot of this is unconscious stuff, bequeathed by the neurotic, war-battered parents of generations ago.

So every culture in the world had safeguards, and one of those was a rite of passage – a very specific and targeted teaching of how to be a good man, along with an actual transition process to make it stick. Andrew Lines, an Australian educator, developed a year-long programme called the Rite Journey, which is now in hundreds of leading schools in Australia and increasingly overseas. Grafted to the year 9 curriculum (aged 14-15), it makes this a year of becoming a man. (Or for girls, a woman).

It brings the teachers into closer contact with the kids as they talk through how to treat the opposite sex, along with many other topics of adult life – purpose, identity, emotional intelligence. I wrote about these and similar programmes in my book Manhood, along with one very striking example – an actual course in preventing rape.

This work by Andrew Renard at St Andrew’s College in South Africa extended over 10 weeks with a group of boys who studied through literature, poetry and reflection the experiences of women who had suffered rape. At one stage they had a visit by a survivor who was brave enough to talk to them about how it had affected her. At no stage was it implied that “all men rape” or that masculinity was toxic, but simply that this was a large and terrible problem in that country. Many boys expressed real grief; they knew about rape but most thought of it as a minor thing, an indignity but not a life-destroying violation. And this experience changed them.

Committed people all over the world are working to change boys and men. Not by assuming badness in them, but helping to maintain their humanity and keep their hearts open. The assaults of a media-driven, dehumanising world – horrific pornography just clicks away, the use of sexuality to sell, and astonishing double standards from the adults around them – make it hard for boys to find their way. We can do so much better. It won’t be a quick fix, but every small step will make one woman or girl safer, and move one young man from being a possible predator to a likely protector.

So, back to the beginning example of your teenage son at a party. Well, talk about it with your son. Hypothetically. It will probably happen, and you and he can figure out ways that he could speak up, get that girl to safety, make a bad situation stop, with good humour if possible. Teenagers need us to give them clear plans and definite ideas of right and wrong. As parents that’s our job.