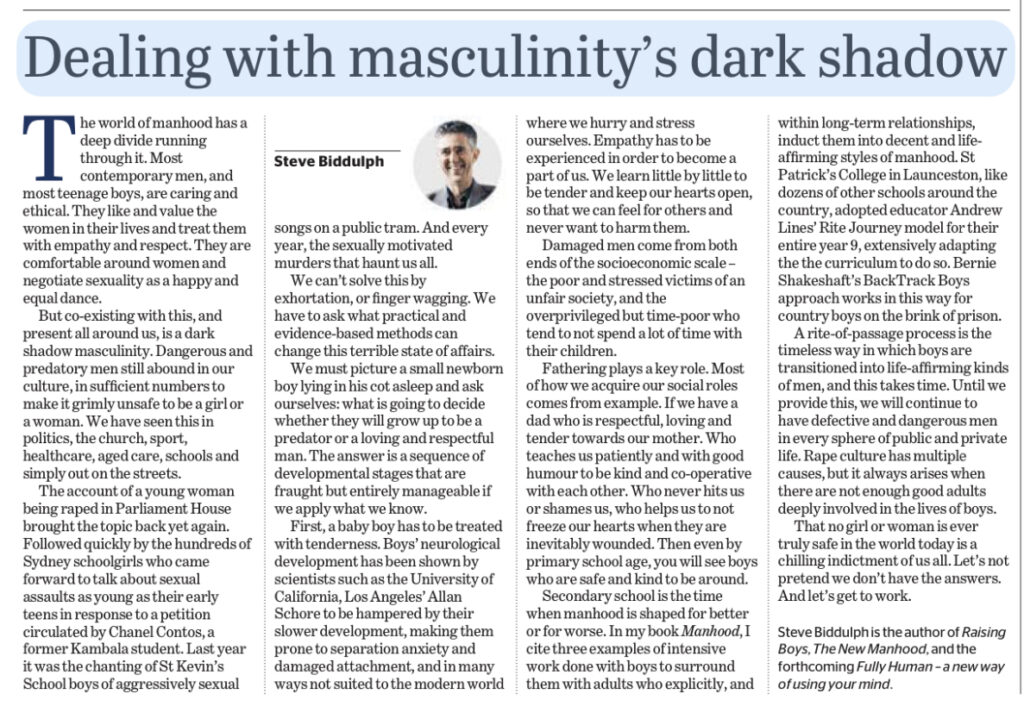 We know what it takes to raise men who don’t rape, so why don’t we act on it?

The world of manhood has a deep divide running throught it. Most contemporary men, and most teenage boys thankfully, are caring and ethical. They like and value the women in their lives, and treat them with empathy and respect. They are comfortable around women and negotiate sexuality as a happy and equal dance.

But co-existing with this, and present all around us, is a dark shadow masculinity. Dangerous and predatory men still abound in our culture, in sufficient numbers to make it grimly unsafe to be a girl or a woman. We have seen this in politics, the church, sport, healthcare, aged care, schools, and simply out on the streets.

The account of a young woman being raped in Parliament House brought the topic back yet again. Followed quickly by the hundreds of Sydney schoolgirls who came forward to talk about sexual assaults as young as their early teens in response to a petition circulated by Chanel Contos, a former Kambala student. Last year it was the chanting of St Kevin’s School boys of aggressively sexual songs on a public tram. And every year, the sexually motivated murders that haunt us all.

We can’t solve this by exhortation, or finger wagging. We have to ask what practical and evidence-based methods – in our families, in schools – can change this terrible state of affairs.

We must picture a small newborn boy lying in his cot asleep and ask ourselves: what is going to decide whether they will grow up to be a predator or a loving and respectful man. The answer is a sequence of developmental stages that are fraught but entirely manageable if we apply what we know.

First, a baby boy has to be treated with tenderness. Boys’ neurological development has been shown by scientists such as the University of California, Los Angeles’ Allan Schore to be hampered by their slower development, making them prone to separation anxiety and damaged attachment, and in many ways not suited to the modern world where we hurry and stress ourselves. Empathy is a quality that has to be experienced in order to become a part of us. We learn little by little to be tender and keep our hearts open, so that we can feel for others and never want to harm them.

Damaged men come disproportionately from both ends of the socioeconomic scale – the poor and stressed victims of an unfair society, and the overprivileged but time-poor who tend to not spend a lot of time with their children.

Fathering plays a key role. Most of how we acquire our social roles comes from example. If we have a dad who is respectful, loving and tender towards our mother. Who teaches us patiently and with good humour to be kind and co-operative with each other. Who never hits us or shames us, who helps us to not freeze our hearts when they are inevitably wounded. Then even by primary school age, you will see boys who are safe and kind to be around.

Secondary school is the time when manhood is shaped for better or for worse. In my book Manhood, I cite three examples of intensive work done with boys at this time to surround them with adults who explicitly, and within long-term relationships, induct them into decent and life-affirming styles of manhood. St Patrick’s College in Launceston, like dozens of other schools around the country, adopted educator Andrew Lines’ Rite Journey model for their entire year 9, extensively adapting the the curriculum to do so. Bernie Shakeshaft’s BackTrack Boysapproach works in this way for boys on the brink of prison in country towns.

A rite-of-passage process is the timeless way in which boys are transitioned into life-affirming kinds of men, and this takes time. Until we provide this, we will continue to have defective and dangerous men in every sphere of public and private life. Rape culture has multiple causes, but it always arises when there are not enough good adults deeply involved in the lives of boys.

That no girl or woman of any age is ever truly safe in the world today is a chilling indictment of us all. Let’s not pretend we don’t have the answers. And let’s get to work.

Steve Biddulph is the author of Raising Boys, The New Manhood, and the forthcoming Fully Human – a new way of using your mind.