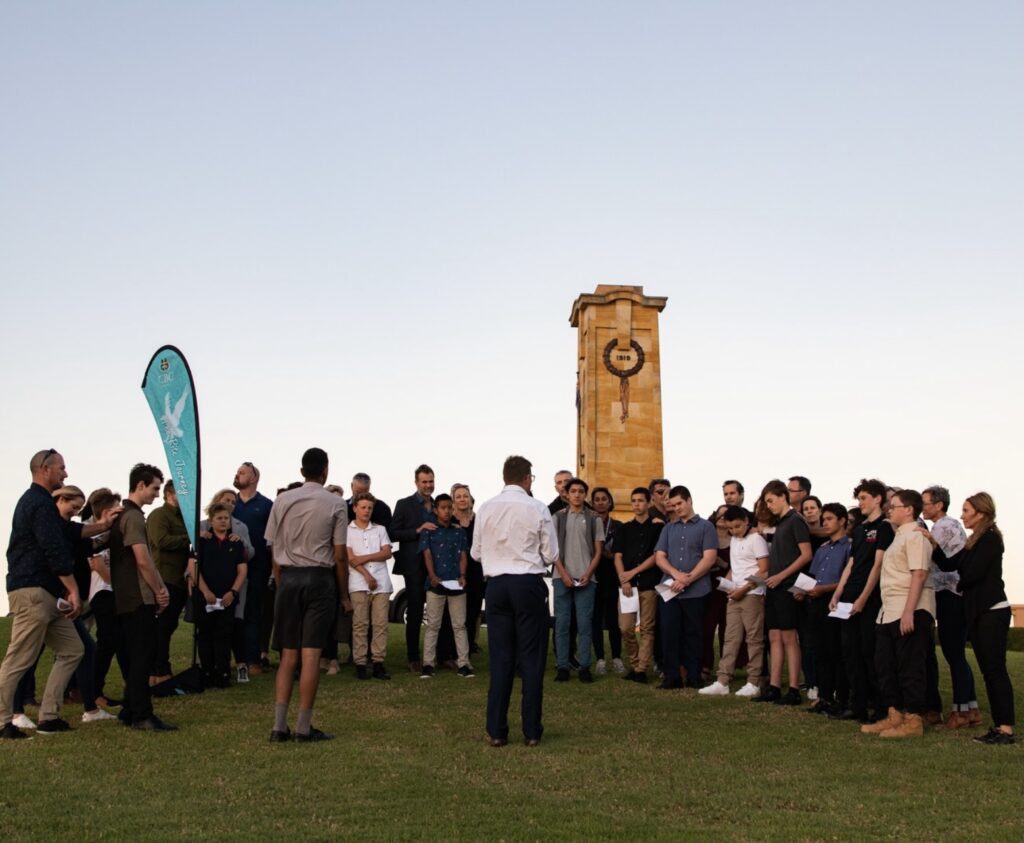 As the sun set over the port of Fremantle, the College gathered to mark the beginning of one of the most special years in any CBC gentleman’s life.

The Rite Journey’s Calling and Departure ceremony is the beginning of the watershed programme in every young man’s journey at CBC, which hopes to guide students through the transition from child to adult.

It began at the base of Monument Hill, where the excited gentlemen gathered with their parents to prepare for the first part of the ceremony.

After Acknowledgement of Country, the programme’s coordinator, Mr Mike Pickford, spoke about the significance of the walk up the hill, and reminded boys of the many hills and obstacles their families have overcome to bring them to where they were standing.

Once at the landmark’s peak, Ms Maria Garbin led the community in a special reflection.

“Down there in that city, or beyond, you have spent your boyhood,” she said.

“Look and remember all those treasured moments that shaped the boy you are today.”

The College’s Principal, Mr Domenic Burgio,  then called the boys to embrace The Rite Journey, urging them to be thankful for their boyhood but to prepare to step into a new and challenging stage of their lives.

A short prayer service followed, in which representatives of each segment of the CBC community offered a prayer for this year’s Rite Journey cohort.

The ceremony ended with the College’s Chaplain, and Rector of St Patrick’s Basilica, blessing the Year 9 boys and their families.

The Rite Journey developing young men then found their own spot on lush grass surrounding the monument to begin the next stage of the ceremony.

As part of The Departure, parents and guardians symbolically handed over their sons to their Rite Journey teacher for the year, as a sign of the trust they are placing in them to form their precious child into a fine young man.

In turn, each young man returned the favour, offering a letter of thanks to his parents for their guidance and love during their childhood, and for their continued support through this next stage of their development.

The Rite Journey programme provides young men with rites of passage that are largely lacking in Western society, which they experience with the support of their parents, caring teachers and significant adult mentors.

The programme concludes at the end of the year when each Rite Journey teacher symbolically returns their students to their parents, in an emotional ceremony along the shore of the Swan River.